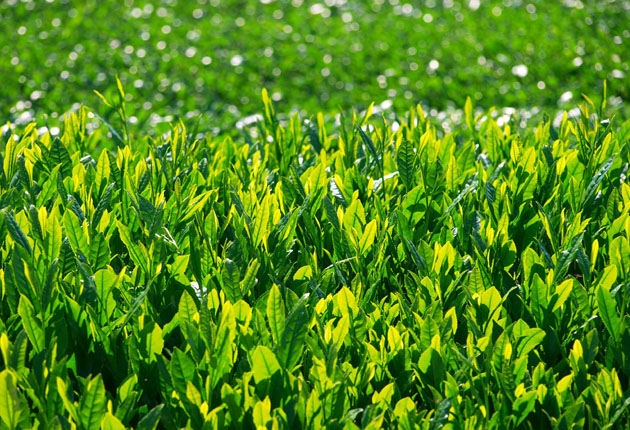 Japanese tea is deeply ingrained in the lives and culture of Japanese people. There are countless words in Japanese with the word tea (cha) in it, such as cha-no-ma (literally, “space for tea”), which refers to the living room—the main room of the house where the entire family gathers, and cha-nomi-tomodachi (literally, “friend that you drink tea with”), which means a close friend. Many sayings and superstitions in Japan involve tea as well. For example, it is said to be a sign of good luck to have a tea stalk floating upright in your tea.

Understanding and experiencing tea is one of the most important keys for learning about Japanese culture.

■The History of Tea

A unique culture, created over 1,000 years

The history of tea in Japan began over 1,200 years ago when Zen Buddhist priest Myoan Eisai first brought tea seeds from China. Since then a unique tea culture has developed in Japan. There is a statue of Eisai on the summit of Mt. Awagatake—the main area where the GIAHS-designated Traditional Tea-grass Integrated System is practiced—and his spirit continues to watch over the tea fields to this day.

Thanks in part to the writings of Eisai, Japanese tea culture spread throughout Japan. In the Sengoku (Warring States) period—an age marked by near-constant military conflict between daimyos (feudal lords who the samurai served under) from 1467 to 1603—tea culture evolved further. During this time, Sen no Rikyu and others refined the tea ceremony into what would become the basis for the tea ceremony practiced today. Sen no Rikyu was close friends with the daimyos Oda Nobunaga and Toyotomi Hideyoshi. Avid collectors of tea utensils, these men placed artistic and monetary value on the vessels used in the tea ceremony and implements used to serve tea. Some of these items were so valuable it was said that one could buy a country with a single tea vessel. The tea ceremony served as a place to teach etiquette, but men like Nobunaga and Hideyoshi also used it to exchange a wide range of information. And they used the valuable tea utensils they owned as a substitute for large currency and as a form of credit.

This was followed by the Edo period (1603–1868)—a 300-year period under the rule of a shogunate when cultural arts grew and flourished. Tea culture grew as well, and cultivation and processing methods were established that would become the basis for modern methods. Up to the Late Edo period tea fields were cultivated in the mountains, but by the Early Meiji (1868 to around 1900), people started cultivating tea on flat land as exemplified in the tea fields on Shizuoka’s Makinohara Plateau.

■Tea—Part of Daily Life in Japan

Nearly 1,200 years later, today tea culture is deeply ingrained in the lives of Japanese people. People all over the country drink it during meals and to quench their thirst. Over the years there has been dramatic advancements in tea cultivation and processing methods, and mechanization has made it possible to mass-produce consistently high-quality tea.

Shizuoka Prefecture is one of the most well-known tea producing regions in Japan.

During the Edo period (1603–1868), several highways connecting Japan’s major cities were built. Tokaido road was the longest of those routes, and a large part of it runs through Shizuoka. Well known as the largest producer of tea in Japan, the prefecture has exported tea around the world since the Meiji period (1868–1912) and boasts some of the highest quality tea in the country. In fact, Shizuoka is so well known as a tea producer that people in Japan automatically think of Shizuoka when they hear the word “tea.”

■The Landscape of Japan

Shizuoka offers some of Japan’s most iconic scenery.


Ukiyo-e paintings painted by master artists such as Katsushika Hokusai and Utagawa Hiroshige in the Edo period (1603–1868) are highly recognized worldwide. These artists depicted Shizuoka in many of their works. Home to Mt. Fuji—one of the most iconic views of Japan—Shizuoka has long been known for its scenic beauty.